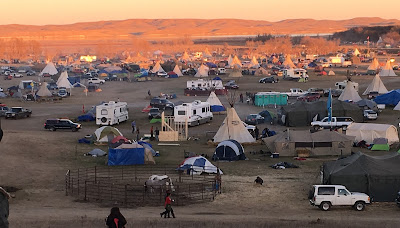 It was night, on November 2nd, when we first pulled over the hill and could see the Oceti Sakowin camp. The sky was black, filled with stars. The river flats below were dotted with campfires, and I could see the shadows of tents, trailers and tepees below. Smoke from the campfires filled the air, and I recognized the pungent smell of burning sage. I could hear the sound of Native American singing, and many different drum circles echoing in the cold North Dakota air. Over 2000 people were staying in the camp that night. The camp was established last spring as an act of opposition to the Dakota Access pipeline, bringing together dozens of Native American tribes and environmental activists from across the country. The residents refer to themselves as “Water Protectors,” guarding the water of the Missouri River, the lifeblood of the Standing Rock Lakota tribe. And then I looked up and saw it on the hill past the camp: the white stadium lights blaring down on the construction site. President Obama had asked that construction be voluntarily suspended, but the work continued as the pipeline inched towards the Missouri River.

Standing Rock is a place I feel deep connection to. I have been to there several times. A friend and mentor of mine served as the Episcopal priest on the South Dakota side of the reservation for a number of years. I had a classmate who was from Standing Rock. During seminary, he died suddenly, and dozens of people from the reservation traveled to New York for the funeral, and we hosted many, including the ceremonial drum in our one bedroom apartment for several days.

Last week, the Reverend John Floberg, the Episcopal priest serving on the North Dakota side of the Standing Rock reservation, issued a call to clergy across the country to join with him for an action against the proposed Dakota pipeline which crosses sacred Lakota lands, and threatens the water of the Standing Rock reservation. He had hoped for 100, and more than 500 came. I was joined by over 25 clergy from Massachusetts, with 15 from the Episcopal Diocese of Massachusetts. The action was prayerful, peaceful, nonviolent.

The Dakota Access pipeline is a 1,170 mile, $3.7 billion pipeline that is slated to cross 4 states to bring North Dakota oil into Illinois for distribution around the world. The pipeline is planned to go under the Missouri River, less than a mile a mile north of the current Standing Rock reservation land, crossing land that is said to be Lakota land by their 1851 treaty with the United States Government. The Standing Rock tribe fear that the pipeline will pollute their drinking water, and its route crosses land that is sacred to their tribe. Original plans showed the pipeline crossing the river north of Bismarck, but it was moved south when the people of the town feared it would pollute their water. The current route is a textbook example of environmental racism, moving environmental risk from whites to vulnerable minorities. This pipeline is just the newest expression of generations of violence against native people. Environmental groups have also joined this movement in order to prevent the pipeline to be built at all, to help keep carbon resources that contribute to climate change in the ground.

On the morning of the action, we gathered at Standing Rock and representatives from different Christian denominations read statements of repudiation of the “Doctrine of Discovery,” the church and legal doctrine that white Christian colonists used to usurp lands from indigenous peoples. From there we marched to the now-blockaded bridge over Cannon Ball River that separates the Oceti Sakowin camp from the pipeline site. This bridge also connects the Standing Rock reservation with hospitals and services in Bismarck, and its closure has led to a 40 mile detour for all emergency vehicles. On one side of the bridge we sang, prayed and offered testimonials. On the other side armored police vehicles, police with automatic weapons and more than 20 police vans kept watch. In recent days police response to protesters have been marked by violence and militarized police tactics, including use of tear gas and pepper spray and use of rubber bullets. The day after the clergy demonstration, two rows of razor wire and concrete barricades were added as well. The Presiding Bishop of the Episcopal Church, Michael Curry, had referred to Standing Rock as “our new Selma.” Standing on that bridge, I knew that to be true.

In contrast to the militarized bridge, Oceti Sakowin camp is a place of extraordinary hospitality, healing and peace. People at the camp refer to everyone as “relatives.” Everyone at the camp is fed and given shelter. Donations of food, clothing, tents and supplies are constantly being delivered from across the country. An elder over a loudspeaker calls out when someone needs a ride or other help, to connect them to those who can provide assistance. There are workshops for healing from trauma and addiction. People from different Native American tribes are finding connection, healing, purpose and cultural revival through the life of the camp. It is a stark contrast to the violence being done on the hill above, violence against the earth and against native peoples. 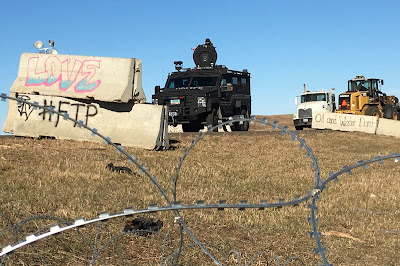 The Obama administration has said it will now look into rerouting the pipeline. There is some hope there for a positive outcome, but public pressure and support of the Water Protectors in the Oceti Sakowin camp must continue as well. And even if the pipeline is moved, native communities will still need our witness and solidarity in the future. I have found that there are moments in a life of faith, and life as a citizen, where we have to stand with a larger community in solidarity with people who are being marginalized, and this is one of those moments.
Posted by The Rev. Noah H. Evans at 9:43 AM